The people of Ada fought many battles to mark territories for their people. The ritual was organized to welcome and honor returning warriors.

The Adangmes fought a lot of wars in a bid to establish a territory for their people. Most famous among these wars are the Katamanso war of 1826, the Glover war of 1876, the invasion by the Anglos in 1770 and the battle of Nonobe in 1750.[2] The people of Ada managed to withstand all these attacks and survived the wars, leading to the successful establishment and survival of the Ada kingdom. As the wars became frequent, rituals were put in place to welcome brave soldiers and war heroes back home. Some of these rituals included feet washing and the firing of muskets to announce their arriva 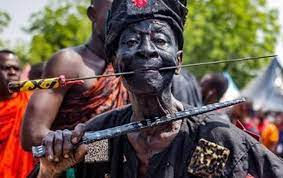