Latest reviews and insights on Ghana

What is CID Jon all about #crackitopen 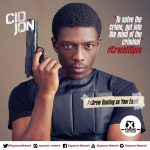 CID Paa Jon Williams returns to the police force after seven years, the reason for his absence was due to the disappearance of this daughter when she was seven. Depressed and unable to continue he decided to take time out. However, things have been developing in the force a new CID boss Kukua Ocansey who is on a mission to get things in order recognizes that CID Jon has some hidden talents and the determination to make things happen. So she makes him an offer he can’t refuse and explains to CID Jon that the force just isn’t as effective without him and “his ways”. CID Jon sees this as an opportunity to make change and also to allow him to use police resources to secretly investigate his own daughter’s disappearance.

Upon his return Jon reunites with his good friend and colleague, Yaw Essel and together they go on a mission to take down some of the most dangerous criminals in the country, with the same unconventional and brutal ways they were infamous for 7 years ago whilst in the process confronting all the personal demons Jon picked up during his time off from the force.

The 8 most recommend night clubs to visit in Accra

10 interesting places for shopping in Ghana